As a concept “Broken English” began in 2015, when I wrote and recorded my first collection of poetry. These pieces are spoken word based and the foundation for my performances on the open mic scene. More info and downloads about this recording are available here or in the National Poetry Library. None of these poems featured in the theatrical show, though this idea was the catalyst for exploring “Broken English” as a sub-culture.

To canvas the idea, I threw an Autumn Ensemble in the Beckenham Place Mansion.

In 2019, the theatrical aspect of “Broken English” was born. An exploration of language through my Caribbean heritage and contemporary British culture, illustrated by historic figures of language and literature. Add a few poetry friends, live drawing on stage and I’ll improvise the beginning. Kool?! Kool!

The play begins with my memoirs about my Dad, when he was seriously unwell in hospital and disillusioned, he thought he was back in Jamaica. He was talking in fluent patois while speaking of locations, activities and people from another time. Thankfully he recovered and was a key contributor and inspiration to this project, providing an original “Anansi” story, which was a fun feature enjoyed by all. Other great contributions came from Julie Pie and the cast, before I developed the concept for the final poem and closing scene at the Bernie Grant Art Centre, in a workshop with Tian Glasgow. 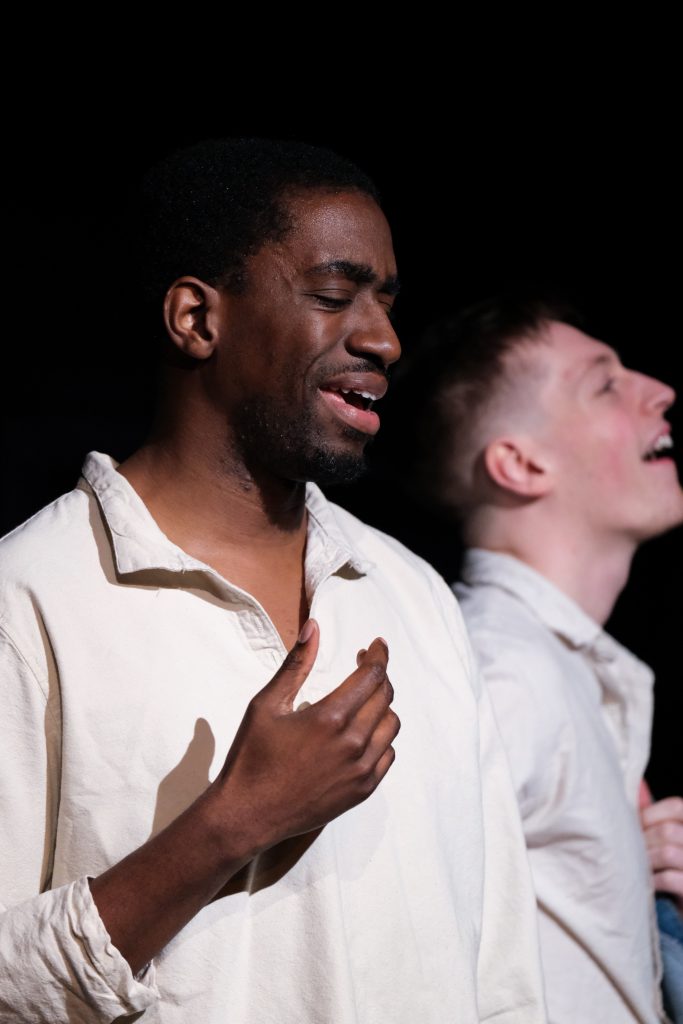 In Broken English I tell a story about the journey and evolution of the English language as a British Caribbean, from a past, present and future perspective. The main idea was to explore language as a culture as well as a means of communication, showing how what once separated people has now become a homogenous feature for so many different cultures here in London.

We held a private preview at the Loft in Honor Oak before taking it to 2019 Edinburgh Fringe, with The Space at venue 49 in the Hilton Hotel. The feature performance happened on our return from Scotland, when we were invited to perform the play at the Tristan Bates Theatre/ Actors Centre in Covent Garden.

After a packed opening, the show sold out the remaining 2 nights and was a great experience for everybody involved. Hearing that they were having to turn people away at the door was genuinely disappointing and I wanted to squash everybody in, but we had reached capacity. It did give me momentum to do a free solo exhibition in the Oxo gallery on the southbank, called “Hands & Words”, where I was able to bring some type of closure to the “Broken English” concept.

I am so proud and privileged to work with such talented artists, who helped to bring this idea to life and share it with the public. We had the flava of spoken word with the uncompromising beauty of theatre, displayed to an engaged audience filled with genuine interest and diversity.

Massive thanks to Tristan Bates/ Actors Centre, for providing such an amazing platform and opportunity and all the parties involved in supporting me through interviews and online promotion. In particular;

One of the most interesting and important features of this production is the audience and the reviews. My sincere thanks to everyone who came out to watch and write about the play.

Ray Woolford: Lewsham Campaigner: “An audience more diverse and as engaging as the performers. A more than able cast of Sam Burnard, the awesome Jake Bryan-Amaning and Rosie May -Jones was able equally to shine on this stripped-back set, making us rethink as an audience how we see and interpret everyday words and their power to enrage, engage, motivate and define us. Shakespeare and Wordsworth are recognized as English language at its most profound and yet I believe, in 20 years, the language of Kate Tempest, George the Poet and Jamar Ngozi will be up there, for Broken English is not just great theatre, it’s a rare piece of work that deserves a broader audience.” – 4 stars.

Brunna Pimentel: Everything Theatre: “I played catch up, trying to understand what was going on. The most enjoyable aspect of Broken English, to me, was the deft and poetic use of language. Language plays a central role in the play, and writer and director Jahmar Ngozi is highly creative with it. ‘English Language’ (played by Rosie-May Jones) is personified as an eccentric woman, who trails off mid-scene into enchanting soliloquies, arguably stealing the best lines in the play. Her speeches are suffused with bountiful imagery, which transported me beyond the confines of the theatre and into far-away galaxies, where words are stars and sentences orbit whole planets.”

Elena Joseph: Afridiziak: “Poetry throughout the showcase and the drama performance was incredible. Broken English is a creative piece worth seeing, weaving in different parts of culture and language. The actors have amazing, natural chemistry and there is a great use of the stage throughout. The concept was brilliant and only just scratched the surface of where it could go being a small independent production. It was amazing to see a diverse cast and more diverse audience, which was accomplished by Ngozi, so hopefully there will be more productions like this in the future.”