My genesis as a playwright was inspired by my Mothers framed Harlem Renaissance poster called “Rhapsodies in Black”, a piece of memorabilia from an exhibition at the Hayward Gallery in the 90’s. It was this image mixed with a nostalgic memory from my childhood of a visit from a family friend who was from Kenya. She had two lovely daughters and we spent a beautiful summer day playing together in the garden.

2015 I had begun writing and performing poetry at various places over London. It was so exciting, I was meeting and listening to so many different brilliant artists. I saw parallels between the lifestyle of London based Artists of Colour and the movement within Harlem from the 1920’s. Everybody was a somebody, so many prominent performers of all different styles and disciplines, though the issues of institutional racism, tokenism, drugs and cultural identity, were all very relevant and applicable.

It all started with a poem I wrote called “Harlem”. In this piece I talk about Harlem and living in the Renaissance era. I describe meeting a beautiful girl and trying to woo her, taking her to all these notable places and socializing with a range distinguished people who are all residents of Harlem.

To be honest I can’t remember the exact point that I decided to turn it to a script, but I remember having the idea to write it for a while. Whilst visiting poetry gigs, I was also casting with this idea in mind. The Apples and Snakes event Jawdance was absolutely buzzing with fresh talent. I met Solomon Adams there who went on to play Langston Hughes and also Danielle Allen who played Georgia Johnson. Most of the other characters were friends  including the amazing Adelaide Mckenzie as Pigfoot Mary and La-Touche The Writer as Sterling Brown. I sourced the rest of the characters through various means and I took the main role of Poet. This left the most important character, “Nairobi” the female lead, to be filled. I produced the play four times and had four different actresses playing her. This was more to do with time clashes rather than suitability, as each actress brough something original and refreshing about the character that I felt was true to the writing. 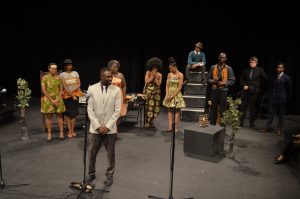 I produced the show independently at a pub theatre in Leytonstone called the Plough & Harrow. It was mind-blowing to open the doors and see people that had travelled across London to come and watch. We had so much fun doing this production. Having such a large cast, rehearsals were fragmented, with me being the only one able to piece things together. So when opening night came around, we didn’t actually have any full rehearsals at all. The cast kind of looked to me to maestro the thing, which was kool and they done a fantastic job, improvising when necessary. Thankfully I filmed it, so occasionally we still look back catch eye water from some of the scenes and characters. The audience actually loved it and I was thoroughly encouraged.

The Arcola Theatre got wind of the show and I was presented with an “Emerging Artist Award” and a development package. This designated space allowed me to really explore character development and become more familiar with the ins and outs of theatre. I found out that I really liked it, the atmosphere, the types of people involved, the creativity, it was all good. I polished the show up and produced it at the Cockpit Theatre as part of the Camden Fringe. The day before the duty manager of the venue comes to me and is like “we’ve only sold one ticket”. This was so disappointing as we had all worked so hard with the marketing and promotion. I went back to the cast and I’m like guy’s it ain’t looking good. But even if we only have one person out there, let’s still put on a show to remember. When the doors opened, people just kept coming in. I was watching from behind a curtain and I remember someone going “wow, that’s a lot of people!” Then the excitement of what was happening just spreading throughout the cast. The calm before the storm, the butterflies, the eye to eye, the rituals, the deep breath, the plunge.

After the show, I gave a short speech to Thank everybody involved. I heard later that I had a sparkle in my eye when I was talking that night. Somethings are hard to put into words. Considering this all started from a poster, a sunny day with some friends and a poem.

A week after this show we were invited to perform it at The Space’s event Bloomfest in Canary Wharf Roof Garden. It was on a beautiful summer and together with a handful of friends, I relayed the story of how Harlem Met Kenya.